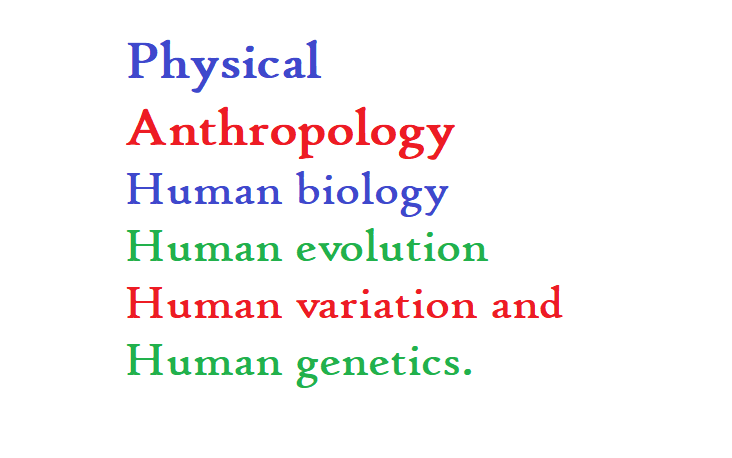 The Physical anthropologist studies human biology as he is interested in Homo sapiens alone. He studies man out of the vast range of creatures that claim the attention of the general biologists. Therefore, there is close relationship between the Physical Anthropology and the study of other living beings. The Physical anthropologist tells about the man’s place in the animal kingdom by making a comparative study on the different groups of man and his near relations like apes, monkey, etc. whom we call primates.

As a subfield of anthropology, biological anthropology itself is further divided into several branches. All branches are united in their common orientation and/or application of evolutionary theory to understanding human biology and behavior.

Biological Anthropology looks different today than it did even twenty years ago. The name is even relatively new, having been ‘physical anthropology’ for over a century, with some practitioners still applying that term. Biological anthropologists look back to the work of Charles Darwin as a major foundation for what they do today. However, if one traces the intellectual genealogy and the culture back to physical anthropology’s beginnings–going further back than the existence of much of what we know now as the hominin fossil record–then history focuses in on the field’s interest in human biological variation. Some editors, see below, have rooted the field even deeper than formal science.

Attempts to study and classify human beings as living organisms date back to ancient Greece. The Greek philosopher Plato  (c. 428–c. 347 BC) placed humans on the scala naturae, which included all things, from inanimate objects at the bottom to deities at the top. This became the main system through which scholars thought about nature for the next roughly 2,000 years. Plato’s student Aristotle (c. 384–322 BC) observed in his History of Animals that human beings are the only animals to walk upright and argued, in line with his teleological view of nature, that humans have buttocks and no tails in order to give them a cushy place to sit when they are tired of standing. He explained regional variations in human features as the result of different climates. He also wrote about physiognomy, an idea derived from writings in the Hippocratic Corpus.  Scientific physical anthropology began in the 17th to 18th centuries with the study of racial classification (Georgius Hornius, François Bernier, Carl Linnaeus, Johann Friedrich Blumenbach).

The first prominent physical anthropologist, the German physician Johann Friedrich Blumenbach (1752–1840) of Göttingen, amassed a large collection of human skulls (Decas craniorum, published during 1790–1828), from which he argued for the division of humankind into five major races (termed Caucasian, Mongolian, Aethiopian, Malayan and American). In the 19th century, French physical anthropologists, led by Paul Broca (1824-1880), focused on craniometry while the German tradition, led by Rudolf Virchow (1821–1902), emphasized the influence of environment and disease upon the human body.

In the 1830s and 1840s, physical anthropology was prominent in the debate about slavery, with the scientific, monogenist works of the British abolitionist James Cowles Prichard (1786–1848) opposing those of the American polygenist Samuel George Morton (1799–1851).

In the late 19th century, German-American anthropologist Franz Boas (1858-1942) strongly impacted biological anthropology by emphasizing the influence of culture and experience on the human form. His research showed that the head shape was malleable to environmental and nutritional factors rather than a stable “racial” trait. However, scientific racism still persisted in biological anthropology, with prominent figures such as Earnest Hooton and Aleš Hrdlička promoting theories of racial superiority and a European origin of modern humans.

In 1951 Sherwood Washburn, a former student of Hooton, introduced a “new physical anthropology.” He changed the focus from racial typology to concentrate upon the study of human evolution, moving away from classification towards evolutionary process. Anthropology expanded to include paleoanthropology and primatology. The 20th century also saw the modern synthesis in biology: the reconciling of Charles Darwin’s theory of evolution and Gregor Mendel’s research on heredity. Advances in the understanding of the molecular structure of DNA and the development of chronological dating methods opened doors to understanding human variation, both past and present, more accurately and in much greater detail.

Another object of Physical Anthropology is to deal with human evolution. Like other creatures man is also a living organism. It is difficult to explain under what conditions life had appeared on earth. But from the geological and palaeontological evidences it has been known that the first living organism that had appeared on earth consisted of one cell only, which is known as a unicellular organism or amoeba. In course of time this simple homogeneous organism through the process of changes attained the heterogeneous form at various stages. Ultimately, a complex form of animal called man had emerged. All living forms of humanity today belong to the single genus and species of Homo sapiens. Man is said to have emerged during the quaternary epoch of Cenozoic era. As time elapsed varieties of man had evolved from the date of his origin.

In analysis of human evolution paleontology plays an important role. Anatomy is essential for studying different human forms especially in the study of racial differences, and no one can specialize Physical Anthropology without prior training in anatomy. On the basis of geological evidences it has become possible to find out the age of the different forms preserved under the earth.

The physical anthropologist after having studies the origin, development and place of evolution of man focuses his attention on the study of the different varieties of man. Outwardly through they appear different, all men have some common characteristics and belong to the species – Homo-sapiens. However, it is generally found that the common hereditary does not resemble those of other groups in various ways. Each of these groups is designated as race. So, in Physical Anthropology the different aspects of race are studied. Somatology – Somato-scopic observation and anthropometry is useful for this purpose.

The methodology of Physical Anthropology has now been changed. The days of descriptive stage are gone and the analytical stage has taken its place. The classical Physical Anthropology was mainly interested in the classification and not in the interpretation. For example, a black native African has platyrrhine nose whereas the European has the leptorrhine nose. Previously it was not interpreted why these two groups of people had different types of noses. Now, explanations are being put forward why they have different types of noses.

In recent times the attention of physical anthropologist has been diverted to Genetics a branch of biology, which deals with descent, variation and heredity. They now study the blood types, difference in musculature etc. They also study the group differences in time of sexual maturation, in growth rates and various disease immunities. These studies have practical value and the results may be used in various ways. The physical anthropologist studies also the influences of the natural environment on man and trees to find out whether the physical traits of man are affected by environment. Moreover, he studies the problems associated with physical changes, effects of food and mode of life on racial and physical characteristics. Other Studies of Physical Anthropology:

There is another subject called pedagogical anthropology which is directly concerned with education. In various educational fields pedagogical studies are utilised by many advanced countries. On the whole, the Physical Anthropology is highly a specialized branch of Anthropology.