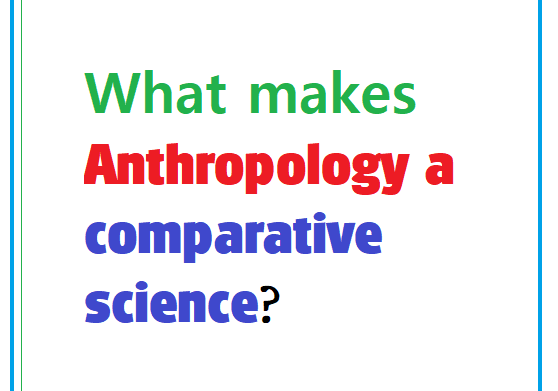 The fact that anthropological analyses are based on comparisons. Now for a brief history:

Back in the 1890s, the cultural anthropologist Franz Boas made a case against the comparative method. His arguments were directed at the so-called evolutionists, early (armchair) anthropologists who conceptualised cultural evolution as unilinear, ranging from savages at the bottom to civilized at the top (guess where they placed themselves). These guys made comparisons between cultures in order to arrive at a common evolutionary history. The classic example would be masked. Group A has masks and so does group B. That must mean that masks evolve at a certain evolutionary stage and that masks represent a specific level of evolutionary level. Boas, being an advocate for historical particularism, opposed this view by pointing to the fact that masks, though similar in appearance, might serve different needs and functions in different societies. Therefore, he said, we cannot make comparisons before we know each culture’s specific history. Overtly similar cultural traits do not necessarily imply similar evolutionary history.

Though Boss’s point is valid, it halted comparison within American cultural anthropology until the 1950s (more or less). On the other side of the pond, however, British social anthropologists maintained their use of the comparative method, albeit in a different form than the early evolutionists.

Using comparison, Radcliffe-Brown showed that the mother’s brother played a key role also in simple societies that were eminently patriarchal (patrilineal descent and ancestor worship, patrilocality, etc.). One reason for this is that the father and his brothers were typically strict and demanding (as they needed to create good heirs), whereas the mother’s brother would be a loving caretaker.

Note that Radcliffe-Brown very much confirmed to Boas’s view of to use comparative method.

Comparisons are still central to anthropological analyses. To some extent, that is obvious as we can only know others through ourselves. Analytically, the comparison is a vital tool because it allows us to see how certain things might have a similar form, but different content. Anthropologists do not use comparison to make value judgments, but to investigate cross-cultural similarities and differences. the comparison is one of three essential analytical tools, together with cultural relativism and holism.