Home » creation of the European Union 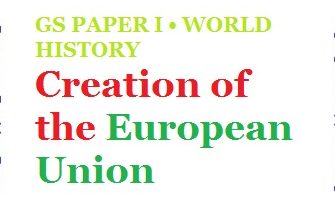 The Treaty of Rome was signed on March 25, 1957, cementing an economic agreement between six European countries that ultimately paved the way to today’s European Union. EU is a political and economic union of 28 states formed by the Maastricht treaty in 1992 located primarily in Europe. The EU was formed to give Europeans the convenience of one currency, to enhance mutual prosperity, and to reduce political tensions after centuries of animosity and war. However, rigid rules and undemocratic working of EU has created a problem to achieve its purpose. There is a need for reforms in the institutional setup to give flexibility for nations in times of crisis and handle sensitive issues like migration.

Factors led to the formation of European union:

The second world war had exhausted the Europe with industries in ruins and defence being weak. A single country wouldn’t have survived the newly started cold war and the countries came together to address the same and formed ECSC (European Coal and Steel Community). It later evolved into the EU.

Political factors: The European Union is set up with the aim of ending the frequent and bloody wars between neighbours, which culminated in the Second World War. With communism and dictatorship on the rise, the EU wanted to promote democracy, freedom, human dignity, Rule of law and Human rights. Economic factor: The world war had destroyed the economy of Europe and the countries came together to ease the trade and to be more competitive in the global marketplace. At the same time, it must balance the needs of its independent fiscal and political members. Handling common global issues: like terrorism, migration issue and so on which was gaining on the circumstances. The Maastricht treaty broadened the EU’s scope, to include both economic and social issues – like education, public health, technological development, and environmental protection, to name a few. Safeguard the culture and respect its rich cultural and linguistic diversity which was under threat after the world war and later during the cold war. The shortcomings of European union are mainly cited for the Brexit and there is a wave of Euroscepticism posing serious challenges to the EU. Yet EU is successful over the years in many aspects.

Crisis in Europe: one of the main reasons for the formation of the European Union is to bring political stability. However, the EU failed many times during the cold war period including bifurcation of Germany, Balkan wars of the 1990s and so on. Immigration crisis: it was not aptly handled by the EU as per the experts which led to protests all over Europe and also a major reason for Brexit. Representation: EU is seen as Anti-Democratic due to its institutional setup. For the same reason, there is Euro-skepticism and the citizens of the EU feel excluded. The European Commission – the executive branch and most important organ of the Union – drafts the laws implemented in member-state countries. But the Commission is unelected by the people. This is against the purpose of the EU which wanted to promote democratic values.  The economic model of the EU is outdated and not catching up with the latest developments. There are no big technological giants competing with Google, Facebook etc., which has made EU redundant to its purpose of competitive economic union. This has made the economic growth weak leading to even Eurozone crisis.  The countries are not having control over monetary policies and due to hardline EU fiscal rules and suffering the deficit in growth. The failure of the EU to deliver led to Italy signing Belt and Road Initiative. After the global financial crisis, instead of taking proactive measures, the EU rules mandated Austerity measures which only increased the Unemployment rates and low growth.