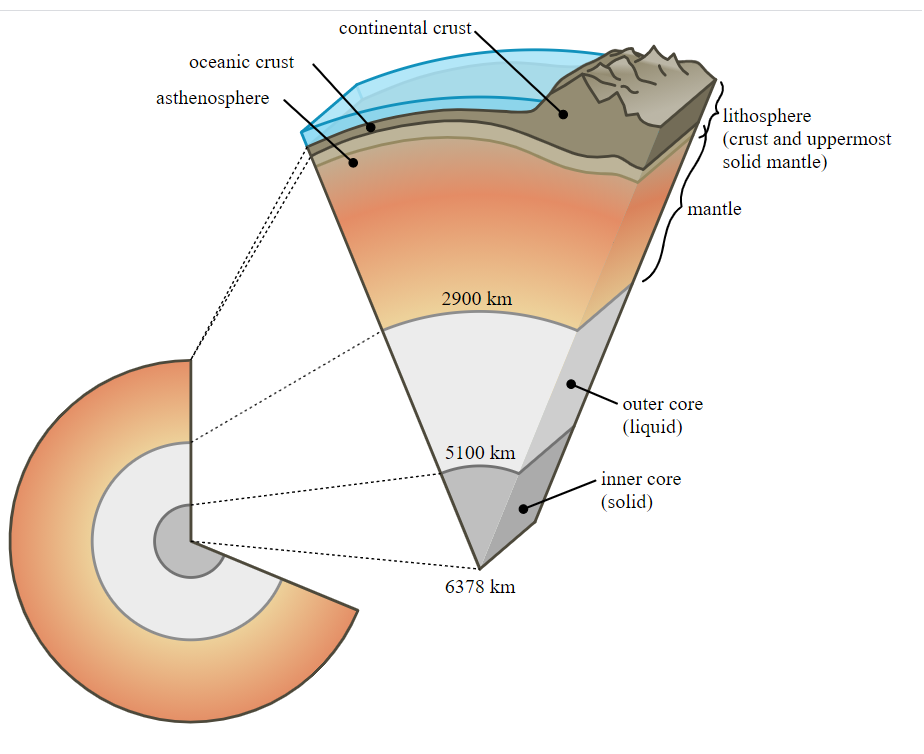 A lithosphere (Ancient Greek: λίθος [lithos] for “rocky”, and σφαίρα [sphaira] for “sphere”) is the rigid, outermost shell of a terrestrial-type planet or natural satellite, that is defined by its rigid mechanical properties. On Earth, it is composed of the crust and the portion of the upper mantle that behaves elastically on time scales of thousands of years or greater. The outermost shell of a rocky planet, the crust, is defined on the basis of its chemistry and mineralogy.

Earth’s lithosphere includes the crust and the uppermost mantle, which constitutes the hard and rigid outer layer of the Earth. The lithosphere is subdivided into tectonic plates. The uppermost part of the lithosphere that chemically reacts to the atmosphere, hydrosphere, and biosphere through the soil-forming process is called the pedosphere. The lithosphere is underlain by the asthenosphere which is the weaker, hotter, and deeper part of the upper mantle. The Lithosphere-Asthenosphere boundary is defined by a difference in response to stress: the lithosphere remains rigid for very long periods of geologic time in which it deforms elastically and through brittle failure, while the asthenosphere deforms viscously and accommodates strain through plastic deformation.

The concept of the lithosphere as Earth’s strong outer layer was described by A.E.H. Love in his 1911 monograph “Some problems of Geodynamics” and further developed by Joseph Barrell, who wrote a series of papers about the concept and introduced the term “lithosphere”. The concept was based on the presence of significant gravity anomalies over continental crust, from which he inferred that there must exist a strong, solid upper layer (which he called the lithosphere) above a weaker layer which could flow (which he called the asthenosphere). These ideas were expanded by Reginald Aldworth Daly in 1940 with his seminal work “Strength and Structure of the Earth.” They have been broadly accepted by geologists and geophysicists. These concepts of a strong lithosphere resting on a weak asthenosphere are essential to the theory of plate tectonics.

There are two types of lithosphere

The thickness of the lithosphere is considered to be the depth to the isotherm associated with the transition between brittle and viscous behavior.[7] The temperature at which olivine begins to deform viscously (~1000 °C) is often used to set this isotherm because olivine is generally the weakest mineral in the upper mantle. Oceanic lithosphere is typically about 50–140 km thick (but beneath the mid-ocean ridges is no thicker than the crust), while continental lithosphere has a range in thickness from about 40 km to perhaps 280 km; the upper ~30 to ~50 km of typical continental lithosphere is crust. The mantle part of the lithosphere consists largely of peridotite. The crust is distinguished from the upper mantle by the change in chemical composition that takes place at the Moho discontinuity.

is the thickness of the oceanic mantle lithosphere, {\displaystyle \kappa }

is the thermal diffusivity (approximately 10−6 m2/s) for silicate rocks, and {\displaystyle t}

is the age of the given part of the lithosphere. The age is often equal to L/V, where L is the distance from the spreading centre of mid-oceanic ridge, and V is the velocity of the lithospheric plate.

Geophysical studies in the early 21st century posit that large pieces of the lithosphere have been subducted into the mantle as deep as 2900 km to near the core-mantle boundary, while others “float” in the upper mantle, while some stick down into the mantle as far as 400 km but remain “attached” to the continental plate above, similar to the extent of the “tectosphere” proposed by Jordan in 1988