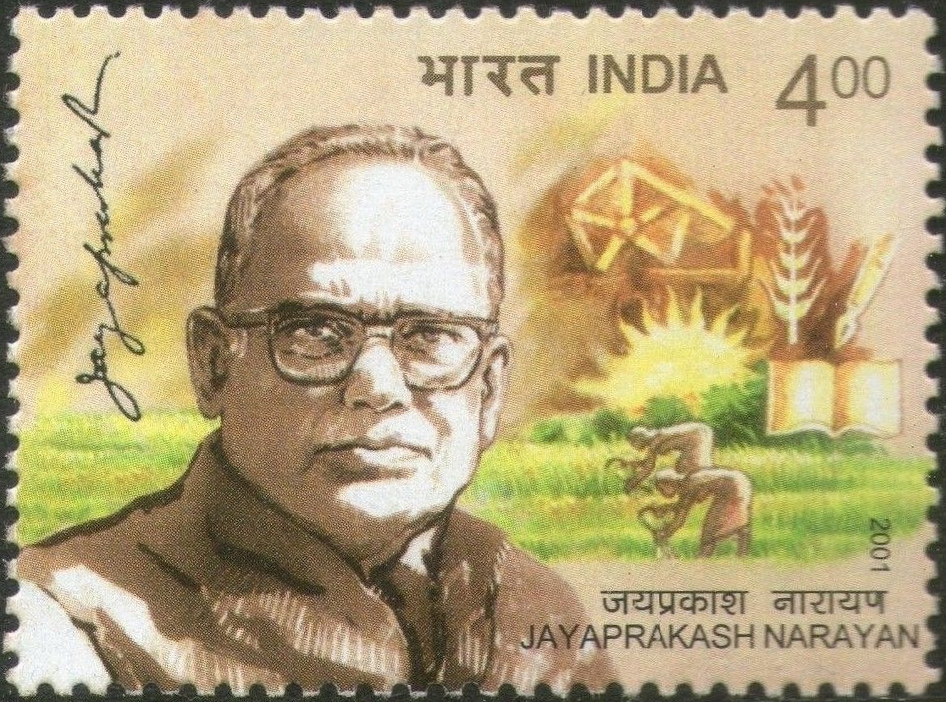 Jayprakash Narayan was born on 11 October 1902 in the village of Sitabdiara, Saran district, Bengal Presidency, British India (present-day Ballia district, Uttar Pradesh, India). Sitabdiara is a large village, straddling two states and three districts — Saran and Bhojpur in Bihar and Ballia in Uttar Pradesh. His house was near the banks of the flood-prone Ghaghara river. Every time the river swelled, the house would get a little bit damaged, eventually forcing the family to move a few kilometres away to a settlement which is now known as Jay Prakash Nagar and falls in Uttar Pradesh.

He came from a Kayastha family. He was the fourth child of Harsu Dayal and Phul Rani Devi. His father Harsu Dayal was a junior official in the Canal Department of the State government and was often touring the region. When Narayan was 9 years old, he left his village to enrol in the 7th class of the collegiate school at Patna. This was his first break from village life. JP stayed at a student hostel—Saraswati Bhawan—in which most of the boys were a bit older. Among them were some of Bihar’s future leaders including its first chief minister, Krishna Singh, his deputy Anugrah Narayan Sinha and several others who were to widely become known in politics and academic world.

In October 1920, 18-year-old Narayan married Braj Kishore Prasad’s 14-year-old daughter Prabhavati Devi, a freedom fighter in her own right, their ages being normal marriageable ages at those times. After their wedding, since Narayan was working in Patna and it was difficult for his wife to stay with him, on the invitation of Gandhi, Prabhavati became an inmate at Sabarmati Ashram (Ahmedabad). Jayaprakash, along with some friends, went to listen to Maulana Abul Kalam Azad speak about the Non-co-operation movement launched by Gandhi against the passing of the Rowlatt Act of 1919. The Maulana was a brilliant orator and his call to give up English education was “like leaves before a storm: Jayaprakash has swept away and momentarily lifted up to the skies. That brief experience of soaring up with the winds of a great idea left imprints on his inner being”. Jayaprakash took the Maulana’s words to heart and left Bihar National College with just 20 days remaining for his examinations. Jayaprakash joined the Bihar Vidyapeeth, a college founded by Rajendra Prasad and became among the first students of Gandhian Anugraha Narayan Sinha.

Jayaprakash Narayan (11 October 1902 – 8 October 1979), popularly referred to as JP or Lok Nayak (Hindi for The People’s Leader), was an Indian independence activist, theorist, socialist and political leader. He is also known as the “Hero of Quit India Movement” and he is remembered for leading the mid-1970s opposition against Prime Minister Indira Gandhi, for whose overthrow he had called for a “total revolution”. His biography, Jayaprakash, was written by his nationalist friend and an eminent writer of Hindi literature, Rambriksh Benipuri. In 1999, he was posthumously awarded the Bharat Ratna, India’s highest civilian award, in recognition of his social work. Other awards include the Magsaysay award for Public Service in 1965.

Higher education in the United States

After exhausting the courses at the Vidyapeeth, Jayaprakash decided to continue studies in the United States. At age 20, Jayaprakash sailed aboard the cargo ship Janus while Prabhavati remained at Sabarmati. Jayaprakash reached California on 8 October 1922 and was admitted to Berkeley in January 1923. To pay for his education, Jayaprakash picked grapes, set them out to dry, packed fruits at a canning factory, washed dishes, worked as a mechanic at a garage and at a slaughterhouse, sold lotions and taught. All these jobs gave Jayaprakash an insight into the difficulties of the working class.

In Wisconsin, Jayaprakash was introduced to Karl Marx’s Das Kapital. News of the success of the Russian revolution of 1917 made Jayaprakash conclude that Marxism was the way to alleviate the suffering of the masses. He delved into books by Indian intellectual and Communist theoretician M. N. Roy. His paper on sociology, Cultural Variation, was declared the best of the year.

Narayan returned from the US to India in late 1929 as a Marxist. He joined the Indian National Congress on the invitation of Jawaharlal Nehru in 1929; Mahatma Gandhi became his mentor in the Congress. He shared a house at Kadam Kuan in Patna with his close friend and nationalist Ganga Sharan Singh (Sinha). with whom he shared the most cordial and lasting friendship. He won particular fame during the Quit India movement. After being jailed in 1932 for civil disobedience against British rule, Narayan was imprisoned in Nasik Jail, where he met Ram Manohar Lohia, Minoo Masani, Achyut Patwardhan, Ashok Mehta, Basawon Singh (Sinha), Yusuf Desai, C K Narayanaswami and other national leaders. After his release, the Congress Socialist Party, or (CSP), a left-wing group within the Congress, was formed with Acharya Narendra Deva as President and Narayan as General secretary.

When Mahatma Gandhi launched the Quit India Movement in August 1942, Yogendra Shukla scaled the wall of Hazaribagh Central Jail along with Jayaprakash Narayan, Suraj Narayan Singh, Gulab Chand Gupta, Pandit Ramnandan Mishra, Shaligram Singh and Shyam Barthwar, with a goal to start an underground movement for freedom. Many young socialist leaders like Ram Manohar Lohia, Chhotubhai Puranik, Aruna Asaf Ali, etc. took part in the underground movement. As Jayaprakash Narayan was ill, Yogendra Shukla walked to Gaya with Jayaprakash Narayan on his shoulders, a distance of about 124 kilometres. He also served as the Chairman of Anugrah Smarak Nidhi (Anugrah Narayan Memorial Fund). Jayaprakash Narayan was President of All India Railwaymen’s Federation,in Between 1947 and 1953, the largest labour union in the Indian Railways.

Narayan returned to prominence in State politics in the late 1960s. 1974 ushered in a year of high inflation, unemployment and lack of supplies and essential commodities. Nav Nirman Andolan movement of Gujarat asked Jayaprakash to lead a peaceful agitation. Following Jayaprakash Narayan’s call for social justice, and demand for dissolution of the Bihar assembly. The Bihar government used brutal force to suppress the movement and on 18 March 1974, police fired on unarmed demonstrators and eight people were killed in police firing. On 8 April 1974, aged 72, he led a silent procession at Patna. As, Jayaprakash Narayan crossed the barricaded area followed by Satyendra Narain Sinha, Shyam Nandan Mishra, Digvijay Narayan Singh & B.R. Chandwar, the procession was lathi-charged. On 5 June 1974, Jayaprakash addressed a large crowd at Gandhi Maidan in Patna. He declared, “This is a revolution, friends! We are not here merely to see the Vidhan Sabha dissolved. That is only one milestone on our journey. But we have a long way to go… After 27 years of freedom, people of this country are wracked by hunger, rising prices, corruption… oppressed by every kind of injustice… it is a Total Revolution we want, nothing less!” In 1974, he led the students’ movement in the state of Bihar which gradually developed into a popular people’s movement known as the Bihar Movement. It was during this movement that JP gave a call for peaceful Total Revolution. Together with V. M. Tarkunde, he founded the Citizens for Democracy in 1974 and the People’s Union for Civil Liberties in 1976, both NGOs, to uphold and defend civil liberties.

Indira Gandhi was found guilty of violating electoral laws by the Allahabad High Court. Narayan called for Indira and the CMs to resign and the military and police to disregard unconstitutional and immoral orders. He advocated a program of social transformation which he termed Sampoorna kraanti, “total revolution”. Immediately afterwards, Gandhi proclaimed a national Emergency on the midnight of 25 June 1975. Desai, opposition leaders, and dissenting members of her own party were arrested that day.

Jayaprakash Narayan attracted a gathering of 100,000 people at the Ramlila grounds and thunderously recited Rashtrakavi Ramdhari Singh ‘Dinkar”s wonderfully evocative poetry: Singhasan Khaali Karo Ke Janata Aaati Hai. Narayan was kept as detenu ((detenu =noun INDIAN a person held in custody- say ” a detainee” .) at Chandigarh even after he asked for one month parole to mobilise relief in flooded parts of Bihar. His health suddenly deteriorated on 24 October, and he was released on 12 November; diagnosis at Jaslok Hospital, Bombay, revealed kidney failure; he would be on dialysis for the rest of his life. In the UK, Surur Hoda launched the “Free JP” campaign chaired by Nobel Peace Prize winner Noel-Baker for the release of Jayaprakash Narayan. Indira Gandhi revoked the emergency on 18 January 1977 and announced elections. The Janata Party, a vehicle for the broad spectrum of the opposition to Indira Gandhi, was formed under JP’s guidance. The Janata Party was voted into power and became the first non-Congress party to form a government at the Centre. On the call of Narayan, many youngsters joined the JP movement.

Narayan died in Patna, Bihar, on 8 October 1979, three days before his 77th birthday, due to effects of diabetes and heart ailments. In March 1979, while he was in hospital, his death had been erroneously announced by the Indian prime minister, Morarji Desai, causing a grief wave of national mourning, including the suspension of parliament and regular radio broadcasting, and the closure of schools and shops. When he was told about the gaffe a few weeks later, he smiled.

At the age of 17, Jayaprakash was married to Prabhavati Devi, daughter of a lawyer and nationalist Brij Kishore Prasad in October 1919. Prabhavati was very independent and on Gandhi’s invitation, went to stay at his ashram while Jayaprakash continued his studies. Prabhavati Devi died on 15 April 1973 after a long battle with cancer.