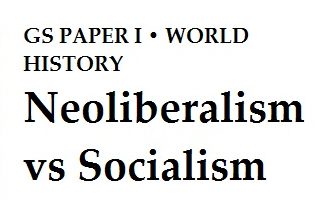 A general characteristic of neoliberalism is the desire to intensify and expand the market which acts as a balancing force. Neoliberalism has overcome the problems of socialism by the rightful mix of market and state role in providing efficient and effective goods and services to citizens.

How Different is Neoliberalism from socialism: