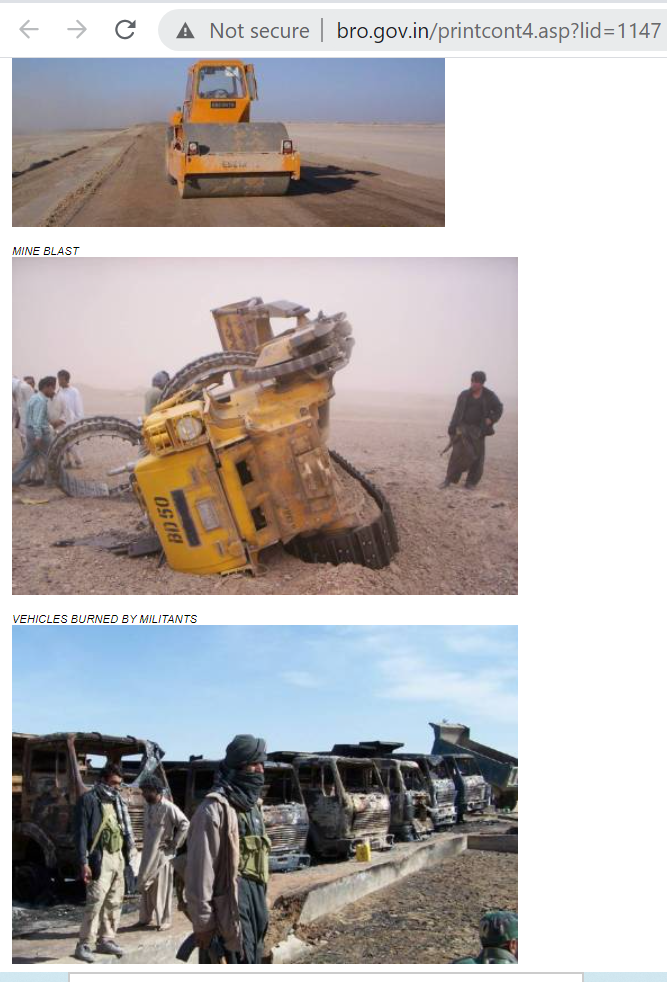 The Border Roads Organisation (BRO)(Indian army corps of engineers) develops and maintains road networks in India’s border areas and friendly neighboring countries. BRO maintains operations in 19 states & three UTs (Andaman and Nicobar Islands, J&K and Laddakh), and neighboring countries such as Afghanistan, Bhutan, Myanmar, and Sri Lanka. The BRO operates and maintains over 32,885 kilometers of roads and about 12,200 meters of permanent bridges in the country.

The BRO was formed on 7 May 1960 to secure India’s borders and develop infrastructure in remote areas of the north and north-east states of the country. In order to ensure coordination and expeditious execution of projects, the Government of India set up the Border Roads Development Board (BRDB) with the Prime Minister as Chairman of the Board and Defence Minister as Deputy Chairman. Today, the board exercises the financial and other powers of a Department of Government of India and is chaired by the Raksha Rajya Mantri (RRM). Among others, Chief(s) of Army and Air Staff, Engineer-in-Chief, Director General Border Roads (DGBR), FA(DS) are members of the BRDB. The Secretary of the Board exercises the powers of Joint Secretary to the Government of India. The executive head of the BRO is the DGBR who holds the rank of Lieutenant General. In a bid to boost border connectivity, the Border Roads Organisation has been entirely brought under the Ministry of Defence. Earlier it received funds from the Ministry of Road Transport and Highways.

The BRO consists of Border Roads Wing under the Ministry of Defense and the General Reserve Engineer Force (GREF) Intergal part of Army. Officers are selected through the Indian Engineering Services (IES) Examination conducted by the Union Public Service Commission (UPSC). Few officers are also deputed from Indian Army Corps of Engineers, who are posted to GREF on ERE. The GREF includes Civil Engineers, Mechanical engineers, Administrative officers and Medical officers. The Border Roads Engineering Service (BRES) officers are governed by Central Civil Services (CCS/ CCA) Rules, 1965. They also subjected to all provisions of The Army Act, 1950 and Army Rules, 1954 except a few exceptions as given in SRO 329 and SRO 330 both 23 Sep 1960 . GREF is an integral part of the Armed Forces within meaning of Article 33 of The Constitution of India and members of GREF are also members of the Armed Forces as declared by Hon’ble Supreme Court in respect of R Viswan V/S Union of India 1983 and authorized for all benefits which are applicable to Armed Forces of India.BRO Organization Chart

The organisation’s operations are spread across India, Bhutan, Myanmar, Tajikistan, and Afghanistan.

Role of the BRO

BRO is entrusted for construction of Roads, Bridges, Tunnels, Causeways, Helipads and Airfields.

The BRO is also in charge of maintenance of its road networks. In many places landslides, avalanches and snow block the routes and have to be cleared as quickly as possible. BRO also employs more than two lakh (200,000) Casual paid labours in the task.

An Internal Financial Advisor (IFA) supports the BRO, performing the roles of Chief Accounts Officer and Internal Auditor. This system was introduced on 23 March 1995 to introduce efficiency and improve resource utilisation. The IFA secured ISO 9001 certification in December 1999.

The BRO undertakes projects in India and friendly countries. These projects typically include developing roads, bridges, and airfields in hostile environments shunned by private enterprises, whether due to security concerns related to hostilities, or because of environmental challenges.

The BRO also played a vital role in reconstruction work in the aftermath of the devastating 2004 tsunami in Tamil Nadu, the 2005 Kashmir earthquake, and the 2010 Ladakh flash floods.

Some of these projects carry out some of the development initiatives of the Indian government in foreign territories like Tajikistan, Afghanistan, Myanmar, and Bhutan. These include the Delaram-Zaranj Highway in Afghanistan, completed and handed over to the Afghan government during 2008, and the restoration of the Farkhor and Ayni air bases in Tajikistan.

In November 2017 BRO announced the plan to construct 17 road and rail tunnels, with a total length of 100 km, on some of the 73 strategic roads on Sino-Indian border to provide the year-round all-weather rail and road surface connectivity. Currently, surface access to high altitude posts on Sino-India border is closed for six months every year due to snowfall and rain, and supplies are through air lift only. Some of these 17 tunnels are already under construction, including Srinagar-Kargil-Leh NH1 in J&K (Zoji La pass tunnel), Leh-Manali Highway in J&K and Himachal Pradesh (Lungalacha La, Bara-lacha la, Tanglang La, Shingo La near Nimo and Rohtang Tunnel), 578 meter Theng Pass tunnel on NH310A between Chungthang and Tung in North Sikkim, Nechipu Pass (near Bomdila) and Sela Pass tunnels on Bogibeel Assam to Sagalee to Tawang NH13 in Arunachal Pradesh. This will reduce the travel time and operational costs, eliminate the risk of avalanche and landslide.Issues

The organisation employs laborers locally. No local laborer is deployed in BRO for more than 179 days at a stretch, thus keeping the nature of their employment casual.

In 2009, eight Shaurya Chakras, all posthumous, were awarded to BRO personnel for their actions in places such as Afghanistan, Sikkim, the north-east and Jammu and Kashmir. Bulldozer operator Zalim Singh, Bar to the Shaurya Chakra, was crushed by boulders while clearing a strategic road for Indian Army tanks. Two BRO men working on BRO’s Project Zaranj in Afghanistan were killed during a suicide bomb attack on Zaranj-Delaram highway. Engineer Santosh Kumar Singh and driver Jaikrit Singh Rawat, while working on the Kishtwar-Sinthan Pass, died in an ambush. Others died or were killed in places such as Meghalaya, Kailash Mansarovar, Kali River and Hapoli Sarli-Huri road.

Nation’s most reputed, multifaceted, transnational, modern construction Organisation committed to meeting the strategic needs of the armed forces with enlightened leadership, a strong, skilled and committed workforce, a well-ingrained value system and a strong environment conscience. Playing a national role in socio-economic development through its large scale contribution to infrastructure development.

To support the armed forces meet their strategic needs by committed, dedicated and cost-effective development and sustenance of the infrastructure. To achieve international levels of quality excellence and time consciousness in a diversified sphere of construction activity in a cost-effective manner. Optimise potential and expertise through increased involvement in agency, transnational and national development projects. To attain leadership in development, adoption, assimilation and use of state of the art technology. To create the environment for accurate, real-time and effective decision making through optimising the use of information technology. Through a focus on core competencies; ensure the highest level of skill and proficiency in construction activity. To sustain a sense of values in the Organisation that will ensure a high level of self-esteem in each individual and immeasurable synergy in the Organisation To help enrich the quality of life of the community and ensure all-round growth.