Home » Everything needs to know about PoSH 2013 and sexual harassment. 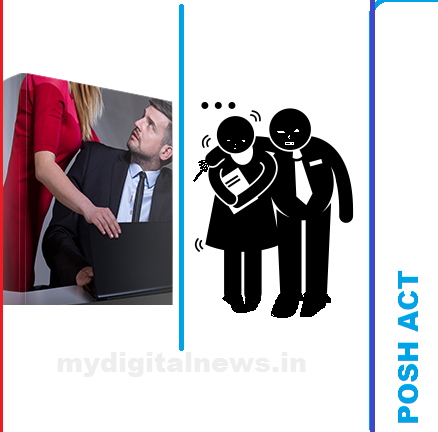 The Sexual Harassment of Women at Workplace (Prevention, Prohibition and Redressal) Act, 2013 is a legislative act in India that seeks to protect women from sexual harassment at their place of work. It was passed by the Lok Sabha (the lower house of the Indian Parliament) on 3 September 2012. It was passed by the Rajya Sabha (the upper house of the Indian Parliament) on 26 February 2013. The Bill got the assent of the President on 23 April 2013. The Act came into force from 9 December 2013. This statute superseded the Vishaka Guidelines for Prevention Of Sexual Harassment (POSH) introduced by the Supreme Court (SC) of India. It was reported by the International Labour Organization that very few Indian employers were compliant to this statute. Most Indian employers have not implemented the law despite the legal requirement that any workplace with more than 10 employees needs to implement it.

According to a FICCI-EY November 2015 report, 36% of Indian companies and 25% among MNCs are not compliant with the Sexual Harassment Act, 2013. The government has threatened to take stern action against employers who fail to comply with this law.

An important feature of the POSH Act is that it envisages the setting up of a grievance redressal forum.

( As per the Repealing and Amending Act, 2016, the nomenclature of Internal Complaints Committee was changed to Internal Committee.)
The POSH Act requires an employer to set up an ‘internal committee’ (“IC”) at each office or branch, of an organization employing 10 or more employees, to hear and redress grievances pertaining to sexual harassment.17 Failure to constitute the IC has led to the imposition of a fine under the POSH Act.18

The Department of Women and Child Development of Telangana and Maharashtra has issued a circular (on 01.07.2019 for Telangana) and an office order (on 23.03.2017 for Mumbai) mandating registration of the IC in Telangana & Mumbai. While employers in Mumbai were required to register their ICs with the office of the District Women and Child Development Officer in the prescribed format, employers in the state of Telangana were required to register their ICs on the Sexual Harassment Electronic Box (“T-she box”).

As per Repealing and Amending Act, 2016, the nomenclature of Local Complaints Committee was changed to Local Committee.

At the district level, the government is required to set up a ‘local committee’ (“LC”) to investigate and redress complaints of sexual harassment from the unorganized sector or from establishments where the IC has not been constituted on account of the establishment having less than 10 employees or if the complaint is against the employer.21 The LC has special relevance in cases of sexual harassment of domestic workers or where the complaint is against the employer himself or a third party who is not an employee.

The POSH Act stipulates that the IC and LC shall while inquiring into a complaint of workplace sexual harassment, have the same powers as vested in a civil court under the Code of Civil Procedure, 1908 when trying a suit in respect of:
i. summoning and enforcing the attendance of any person and examining him on oath;
ii. requiring the discovery and production of documents, and
iii. any other matter which may be prescribed. (Section 11(3) of the Prevention of Workplace Sexual HarassmentAct )

Constitution of the LC

Chairperson : An eminent woman in the field of social work and committed to the cause of women.

Local Woman: One of the members to be nominated from amongst the women working in block, taluka, tehsil or
ward or municipality in the district.

NGO members: Two members, out of which, at least one shall be a woman to be nominated from an NGO or an association committed to the cause of women or a person familiar with issues pertaining to sexual harassment.

Women safety at the workplace

What is considered to be harassment at the workplace?

Under POSH Act, section 2 provides details of actions which come under the domain of harassment, these are; Any unwanted physical contact or advances towards the victim which could be intimidating or sexual in nature. Any demands for sexual favors. Passing demeaning or sexual remarks over the color of the victim. Forcefully showing pornography to the victim. Unwanted abusive, sexual or physical conduct. Furthermore, the act broadens its definitions of sexual harassment which indicates its usage in various situations at the workplace. Here are some of these acts; and any form of a promise to give preference towards any growth or hiring in victims’ employment. Threat of any form to disrupt the victim’s employment if sexual request or demand isn’t met. Threat made towards altering or interfering in victims present or future employment status. Creation of hostile or offensive work environment for the victim. Any undesired treatment which can affect victims’ health or safety.

Section 4 of this Act mentions the measures (which are declared mandatory) to be taken by employers to safeguard women at the workplace. Here are the pointers which are important to comply with for every employer. These measures are termed mandatory for every firm which has more than 10 employees on its rolls. Drafting an internal committee which should mandatorily comprise of a presiding officer (a woman) who shall be appointed by the senior management. At least one external member who is from any external non-government organization, NGO. Minimum of two employees from the same firm who shall represent the employees of an organization. At least one half of the panel should be women. This is to make sure the balance of gender ratio & provide a comfort level to the victim to speak freely.

Employees should go through POSH training at least once mandatorily every year. Every case that is reported, irrespective of assuming the intention or level of impact, it is mandatory for the committee to enquire in each case. If the employer fails to comply with the act within the workplace, a hefty fine which may go up to 50,000 can be imposed. If the same is still not brought into effect, the fine amount can spring up to twice the fine for the first time noncompliance. Along with that, cancellation of license, withdrawal can also be levied by the government.

The POSH Act has provided a structured definition of sexual harassment within a workplace. This has broadened its concept & helped in safeguarding the safety of women within the corporates of modern India. However, it has some shortcomings too. Here are some pros & cons of the POSH Act.

The introductory text of the Act is:

WHEREAS sexual harassment results in violation of the fundamental rights of a woman to equality under articles 14 and 15 of the Constitution of India and her right to life and to live with dignity under Article 21 of the Constitution and right to practise any profession or to carry on any occupation, trade or business which includes a right to a safe environment free from sexual harassment;

AND WHEREAS the protection against sexual harassment and the right to work with dignity are universally recognised human rights by international conventions and instruments such as Convention on the Elimination of all Forms of Discrimination against Women, which has been ratified on the 25th June 1993 by the Government of India;

AND WHEREAS it is expedient to make provisions for giving effect to the said Convention for protection of women against sexual harassment at workplace.

Major features of the PoSH Act 2013

Through the Criminal Law (Amendment) Act, 2013, Section 354 A was added to the Indian Penal Code that stipulates what consists of a sexual harassment offence and what the penalties shall be for a man committing such an offence. Penalties range from one to three years of imprisonment and/or a fine. Additionally, with sexual harassment being a crime, employers are obligated to report offences.

Brinda Karat, serving in the Rajya Sabha as a Communist Party of India (Marxist) member for West Bengal, initially complained that the Bill does not cover women in the armed forces and excludes women agricultural workers, “a gross injustice to agricultural workers who are the single largest female component of the workforce in the country.” However, the final bill includes the clause “No woman shall be subjected to sexual harassment at any workplace” (clause 3.1), and is considered to have addressed those concerns. In the May 2012 draft Bill, the burden of proof is on the women who complain of harassment. If found guilty of making a false complaint or giving false evidence, she could be prosecuted, which has raised concerns about women being even more afraid of reporting offences. Before seeing the final version of the bill, lawyer and activist Vrinda Grover said, “I hope the Bill does not have provisions for penalizing the complainant for false complaints. This is the most under-reported crime. Such a provision will deter a woman to come forward and complain.” Zakia Soman, a women’s rights campaigner at ActionAid India said that “it helps to have a law and we welcome it, but the crux will lie in its implementation once it is enacted.”

Manoj Mitta of The Times of India complained that Bill does not protect men, saying it “is based on the premise that only female employees needed to be safeguarded.” Nishith Desai Associates, a law group, wrote a detailed analysis that included concerns about the role of the employer in sexual harassment cases. They called out the fact that there is no stipulated liability for employers in cases of employee-to-employee harassment, something upheld in many other countries. They also viewed the provision that employers are obligated to address grievances in a timely manner at the workplace as problematic because of potentially uncooperative employees. Furthermore, the law requires a third-party non-governmental organisation to be involved, which could make employers less comfortable in reporting grievances, due to confidentiality concerns.

Compliance to this statute has so far been left to the vagaries of the employers and government has not taken any significant step to enforce the law so far. For example, 6 months after the law came into effect, the state in UP remained dreadful as women could not participate in the workforce due to sexual harassment. Every day women are being harassed but there are no records for many cases.

Some tribunals have commented on the constitutionality of some of the provisions of the statute, especially section 4 and Section 7.