Home » How the President of India is elected 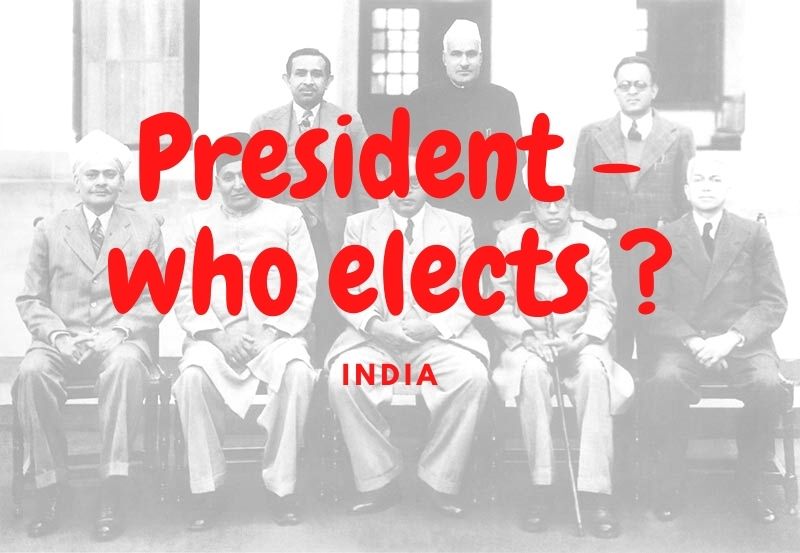 All that you should know about the Indian Presidential election.

All about the Indian Presidential election:

What are the roles and the powers of the President of India?

India has adopted the system of Parliamentary democracy, where in the powers of the Government are vested in the political office of the Prime Minister. The President of India holds the highest elective office in India. He is the head of state of the Republic of India and is the formal head of the Union legislature and executive and is also the Supreme Commander of the Indian Defence Forces. The President of India is the first citizen and represents the Indian nation and therefore does not belong to any particular party. The President of India, in consultation with the Council of Ministers, makes all major appointments under the Constitution-PM, Ministers, Chief Justice and judges of the Supreme Court and High Courts, CAG, Attorney General, Governors, Chief Election Commissioner and other members of the Election Commission of India etc. He has the powers to summon and prorogue the sessions of both Houses of Parliament and to dissolve the Lok Sabha. The powers to grant pardon and clemency vest in the President of India.

Who elects the President of India?

What is the term of the office of the President?

When is the election of the Office of President of India held?

Under the provisions of sub-section (3) of section 4 of the Presidential and Vice-Presidential Elections Act, 1952, the notification under sub-section (1) of section 4 of the said Act calling the election can be issued by the Election Commission on or after the sixtieth day before the expiry of the term of office of the outgoing President. The election schedule shall be so fixed, that the President elect is able to enter upon his office on the day following the expiry of the term of the outgoing President.

What is the legal framework for the election to the Office of President of India?

Election to the Office of President of India is governed by the provisions contained in Articles 54 to 58 and 62 of the Constitution of India and the Presidential and Vice-Presidential Elections Act, 1952 and the Rules made thereunder.

Who conducts the election to the Office of President of India?

Under Article 324 of the Constitution of India, the authority to conduct elections to the Office of President is vested in the Election Commission of India.

What electoral system/process is adopted for the election to the office of the President?

As per Article 55(3) of the Constitution of India, the election of the President shall be held in accordance with the system of proportional representation by means of single transferable vote and the voting at such election shall be by secret ballot.

What are the Qualifications required by a candidate to contest the election to the Office of the President of India?

A candidate should satisfy the following requirements to contest the election to the Office of President: –

1. Must be a citizen of India. 2. Must have completed 35 years of age. 3. Must be eligible to be a member of the Lok Sabha. 4. Must not hold any office of profit under the Government of India or the Government of any State or under any local or other authority subject to the control of any of the said Governments- Exceptions are the offices of President and Vice-President, Governor of any State and Ministers of Union or State.

Apart from the above what are the conditions to be fulfilled by a candidate for his nomination to be valid?

A nomination paper of a candidate for the election in the prescribed form (Form 2 appended to the Presidential and Vice- Presidential Elections Rules, 1974 Rules) has to be subscribed by at least fifty electors as proposers and at least fifty electors as seconders and has to be presented to the Returning Officer, between 11AM and 3PM on any day appointed for the purpose, either by the candidate himself or by any of his proposers or seconders. The Security Deposit for the election of Rs.15000/- should also be deposited either in cash with the Returning Officer or a receipt showing that the amount has been deposited by the candidate or on his behalf in the Reserve Bank of India or in a Government Treasury should be furnished along with the nomination paper. The candidate is also required to furnish a certified copy of the entry showing his name in the current electoral roll for the Parliamentary Constituency in which the candidate is registered as an elector.

By convention, the Secretary General, Lok Sabha or the Secretary General, Rajya Sabha is appointed as the Returning Officer, by rotation. Two other senior officers of the Lok Sabha/ Rajya Sabha Secretariat and the Secretaries and one more senior officer of Legislative Assemblies of all States including NCT of Delhi and the Union Territory of Puducherry are also appointed as the Assistant Returning Officers. The Election Commission of India makes such appointments.

Can a Candidate submit more than one nomination paper? What would be the security deposit to be made by such candidate?

Yes. A candidate can present by himself or in his behalf a maximum of four nomination papers. However, he is required to make only one security deposit in this regard.

Can an elector propose or second the nomination of more than one candidate at a Presidential election?

What are the grounds for rejection of the nomination of a candidate in the Presidential election?

A nomination paper may be rejected on the following grounds:-

What is the colour and form of ballot papers used in the election to the office of the President?

Where is the election to the Office of President held?

A Room in the Parliament House in New Delhi and a room in all State Legislative Assembly Secretariats are generally fixed as places of poll.

Can the electors choose their place of voting?

Yes. While normally Members of Parliament vote in New Delhi and the members of the State Legislative Assemblies, including the members of the Legislative Assemblies of NCT of Delhi and UT of Puducherry vote at the place fixed in each State/UT capital, facilities are provided by the Election Commission for any MP to vote in the capital of his State and similarly an MLA may vote at the polling booth set up in the Parliament House, if he is in Delhi on the date of poll. However, the MP or MLA who opts to vote in a place other than the place where the member is designated to vote is required to intimate the same to the Commission well in advance (ten days) for making necessary arrangements. In exceptional circumstances, MLAs may be permitted by the Commission to vote at other State Capitals also.

How is the value of votes of members of the Electoral College calculated?

The value of votes of electors is basically determined on the basis of population of the States. The Constitution (Eighty fourth) Amendment Act, 2001 provides that until the population figures for the first census to be taken after the year 2026 have been published, the population of the States for the purposes of calculation of value of the votes for the Presidential Election shall mean the population as ascertained at the 1971 census. The value of the vote of each member of the Electoral College, who is a member of a State Legislative Assembly, is calculated by dividing the population of the State by the total number of elected members of the Assembly, and then to divide the quotient by 1000. Total Value of all members of each State Assembly is worked out by multiplying the number of elective seats in the Assembly by the number of votes for each member. The total value of votes of all the States added together is divided by the total number of elected members of Parliament (Lok Sabha 543+Rajya Sabha 233) to get the value of votes of each Member of Parliament. The statement of Value of Votes of MLAs & MPs as per Article 55(2) of the Constitution is given below*.(Appendix)

What is the manner/procedure for recording votes at an election to the office of President?

In accordance with the system of proportional representation by means of single transferable vote, every elector can mark as many preferences, as there are candidates contesting the election. These preferences for the candidates are to be marked by the elector, by placing the figures 1, 2, 3, 4, 5 and so on, against the names of the candidates, in the order of preference, in the space provided in column 2 of the ballot paper. The preference can be indicated in international form of Indian numerals or in the form used in any Indian language or in Roman form but the preferences cannot be indicated in words like one, two, first preference second preference etc.

Are Nominated Members of either Houses of Parliament or a State Legislative Assembly eligible to vote at the election to the Office of President?

No. Only elected members of both Houses of Parliament and of the State Legislative Assemblies are members of the Electoral College. Therefore nominated members cannot vote.

What are the grounds for rejection of the ballot papers?

The Returning Officer shall reject a ballot paper as invalid on which:

A ballot paper will be invalidated if the preference is marked in words like one, two, three or first preference, second preference, third preference, etc instead of in figures 1, 2, 3 etc. A postal ballot may be rejected if the signature of the elector on the declaration and the attestation form received with the ballot paper is not duly attested by the authority specified in such form (who is normally the officer-in-charge of the jail or the place of detention).

What is the procedure of counting in a Presidential election? How is the quota of votes to be secured by the winning candidate determined?

For ascertaining the quota sufficient to secure the return of a candidate, the value of votes credited to each contesting candidate in the first round of counting is added up to determine the total value of valid votes polled at the election. Such total value of valid votes is then divided by two, and one is added to the quotient so obtained, ignoring the remainder, if any. The number so determined, is the quota, which a candidate should secure to be declared elected.

If the total value of the votes credited to any candidate at the first count, is equal to, or greater than the quota sufficient to secure the return of a candidate, he is declared elected by the Returning Officer. If however, after the first round of counting, no candidate secures the requisite quota, then the counting proceeds on the basis of a process of elimination and exclusion, whereby the candidate credited with the lowest number of votes is excluded and all his ballot papers are distributed among the remaining (continuing) candidates on the basis of the second preferences marked thereon. The value of such transferred ballot papers will be the same as the value at which the excluded candidate received them. The ballot papers on which second preference is not marked is treated as exhausted ballot papers and shall not be further counted, even if the third or subsequent preferences are marked thereon.

When is the security deposit of a candidate in a Presidential Election forfeited?

The Security deposit shall be forfeited if the candidate is not elected and the number of valid votes polled by him does not exceed one-sixth of the number of votes necessary to secure return of a candidate at such election. In other cases, the deposit will be returned to the candidate.