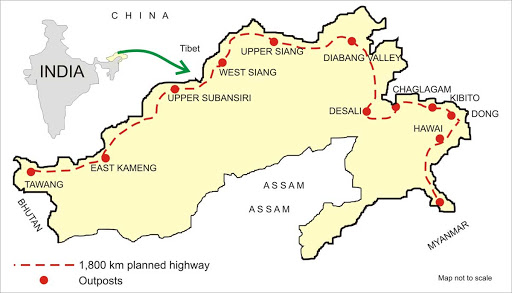 India-China Border Roads (ICBR) project is a Government of India project which aims to develop the infrastructure along the Sino-Indian border by constructing “strategic roads”. Several entities are responsible for constructing ICBR, including Border Roads Organisation (BRO) which handles the bulk of the ICBR road construction work,[1] NHAI, MoDNER, Central Public Works Department (CPWD), National Projects Construction Corporation (NPCC), PWDs of respective states and others. China, after significantly upgrading infrastructure in Tibet Autonomous Region with five airbases, an extensive rail network and more than 58,000-km of roads network, is also resorting to “a slow but steady cartographic aggression” to keep India under geo-strategic pressure.

BRO is responsible for constructing 105 ICBR, including 73 ICBR roads in Phase-1 to be completed by December 2020 and 32 ICBR roads in Phase-2. BRO is responsible for the road network of 32,000 km length, out of which 67% are assigned to ICBR roads. Out of 73 ICBRs in Phase-1, less than 50% were complete by 2018, subsequently, with additional funds the speed of construction increased. Some of the important projects include the already completed Darbuk-Shayok-Daulat Beg Oldie (DS-DBO) road and also the Atal Tunnel(Rohtang tunnel), and in the northeast the under construction Sela Tunnel and an under-construction tunnel under the Brahmaputra river with Indian Railways.

In the wake of heightened road and track construction work undertaken by China along with India’s Northern & Eastern Frontiers, India constituted a China Study Group (CSG) in 1997, to study the requirement of road communication, along the China border for the brisk movement of troops in case of aggression. At the end of the study, the CSG identified a network of 73 roads called India-China Border Roads (ICBR), to be developed along the Indo-China border. The Cabinet Committee on Security (CCS) in 1999 approved the construction of these roads by the Border Roads Organisation (BRO) under the Ministry of Defence. The project was to be completed by 2006 but the deadline was then extended to 2012. The Standing Committee on Defence, a body for legislative oversight, appraised strategic road connectivity in 2018. With regard to the slow pace of construction of border roads, the Border Roads Organisation stated to the committee:

It would not be incorrect to say that few years back the philosophy of our nation was that we should not make roads as near to the border as possible. That philosophy is telling today very clearly as to why we do not have roads. It is only couple of years back that we suddenly decided a change of philosophy and said no, we must go as far forward as possible. It is going to take time. Unfortunately, the time cannot be compressed. Whatever we can do, it will take time.— BRO, 15th Report, Standing Committee on Defence (2018-19)

Reasons such as climate, geography, land acquisition and natural disasters also accounted for the delays. In 2013 the United Progressive Alliance (UPA) government took multiple administrative decisions to speed up construction. The 2017 Doklam standoff was a wake up call for the Modi-government with related to border infrastructure along the China border.

Ministry of Defence submitted a total operational requirement of 852 roads of length 30118 km to the BRO. Out of this, border roads have been classified under the Long Term Roll on Works Plan (LTRoWP); that is 530 roads spanning 22803 km including 73 ICBRs. The work structure for the ICBRs is divided among different agencies. Out of the 73 ICBRs, BRO was responsible for 61 roads while the remaining to other departments such as the National Buildings Construction Corporation (NBCC), Central Public Works Department (CPWD), National Projects Construction Corporation (NPCC) and state public works departments. ICBRs are present in Jammu and Kashmir, Ladakh, Himachal Pradesh, Uttarakhand, Sikkim and Arunachal Pradesh. Arunachal Pradesh has the most proposed ICBRs numbering 27. Funds were also diverted from “General Staff (GS) roads” to ICBRs.

Some of the important projects include the Darbuk-Shayok-Daulat Beg Oldie (DS-DBO) road and Rohtang tunnel in the Ladakh; and in the northeast the Sela Tunnel and a road and rail tunnel under the Brahmaputra river with Indian Railways.

Phase 2 aims to construct 32 roads along the border. In June 2020, amid the India-China skirmishes, the government asked all bodies to speed up the construction of the roads. Additional labour was also sent to these areas to assist in speeding up construction.

India’s Ministry of Defence (MoD) has identified at least 15 new geostrategic rail lines to be constructed near China, Pakistan and Nepal border for the rapid and easier deployment of troops. China has built lines up to Shigatse in Tibet, with plans to connect it to Nepal and further to India. After these lines proposed by MoD in 2013, GoI approved the initial surveys of all 14 lines in 2014, Some of these as well as other related projects are as follows:

As of June 2020, ICBRs included a total of 26 road tunnels, of which 7 were complete and 19 road tunnels were under planning stage. As of November 2017, BRO was constructing 17 road tunnels of a total length of 100 km, on some of the 73 strategic roads on Sino-Indian border to provide the year-round all-weather rail and road surface connectivity. Some of these tunnels have dual road and rail usage. Presently, road access to high altitude posts on the Sino-India border is closed for six months every year due to snowfall and rain, and supplies are through airlift only. These tunnels will reduce the travel time and operational costs, eliminate the risk of avalanche and landslide. Some of these tunnels are under construction while others are still in the planning stage. List of tunnels, from west to east along India China border, is as follows:

Sagarmala port development project and Waterways projects will also enhance geostrategic capabilities along LAC and elsewhere. Following waterway projects in Assam on Brahmaputra River and its tributaries are of geostrategic importance for the movement of military assets: