Home » President of India versus Prime Minister of India 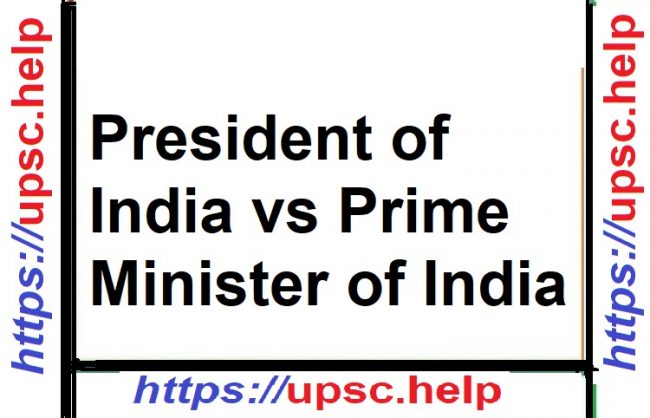 In Relation to the President

The prime minister enjoys the following powers in relation to the president: 1. He is the principal channel of communication between the president and the council of ministers. 2. He advises the president with regard to the appointment of important officials like attorney general of India, comptroller and auditor general of India, chairman and members of the UPSC, election commissioners, chairman and members of the finance commission and so on.

In Relation to Parliament

The prime minister is the leader of the Lower House. In this capacity, he enjoys the following powers: 1. He advises the president with regard to summoning and proroguing of the sessions of the Parliament. 2. He can recommend dissolution of the Lok Sabha to resident at any time. 3. He announces government policies on floor of the House.

In addition to the above-mentioned three major roles, the prime minister has various other roles. 1. He is the chairman of the Planning Com-mission, National Development Council, National Integration Council and Inter-State Council. 2. He plays a significant role in shaping the foreign policy of the country. 3. He is the chief spokesman of the Union government. 4. As a leader of the nation, he meets various sections of people in different states and receives memoranda from them regarding their problems, and so on. 5. He is the crisis manager-in-chief at the political level during emergencies. He is leader of the party in power and the political head of the services.